Marconi Celebrations 2022 - A day of celebrations

Christian Centre   Dave Monk from BBC Essex Radio will open the weekend celebrations on the Saturday at 10.30am which will have display boards depicting Marconi’s achievements and the role of the radio broadcasts from ‘The Marconi Hut’ in Lawford Lane under its call sign of 2MT. Also Writtle Archives Display of photos of the village 100 years ago and Thomas USBORNE, his glass slides from the early 1900’s.  The original camera and projector will be on show for the first time in Writtle. More school projects will also be on display.

During the day there will also be radio equipment demonstrations given by members of the Chelmsford Science and Engineering Society.

In the small hall there will be informal talks involving aural and visual aids lasting about 25 minutes. Free tickets will be available near the door into the Small Hall in the hour before the start of each talk as numbers are very limited. Exit will be made via the door at the rear of the hall and through the Quiet Room exit.

All the talks are given by ex-Marconi employees. They are not technical and are aimed at the general public.

Peter WATKINS will talk about the ‘Hut’ and the displays that featured within it until recently.

Paul GREEN is the owner of most of the domestic receivers on display and will talk about the trials and tribulations of operating a wireless receiver in the early days of radio.

John RHODES has always had an interest in both audio and video.  He was often the man behind the scenes at many of Chelmsford’s cinemas as well as the Civic Theatre.

Richard HERRING takes a look at the part played by Writtle in the development of aircraft radio.  Without this 2MT would never have started in Writtle.

Tim WANDER   Apart from writing several books on 2MT, Tim has lectured and broadcast on this subject many times. Never lost for words Tim will answer any questions you may have.

Village Hall   There will be a display of paintings related to the 1920’s by the Writtle Art Group and Portrait group, plus project work from the Infants and Junior schools.  The Chelmsford Amateur Radio Society (CARS) will again set up a Special Event Station in the rear hall. Refreshments provided by the WI.

Writtle Green   Scientific activities to keep the children amused with the help of the Scouts and Guides are planned for the Green, plus an ice cream van and burger van and a few vintage cars.

The Institute of Digital Archaeology from Oxford University will be bringing their Marconi Van exhibition – a unique multimedia, interactive exhibition, housed inside a 1968 Morris Traveller.

The Writtle Wireless Walk – Come and join a Marconi historian on a guided circular tour of the village highlighting its many connections to those early days of wireless broadcasting. The narration will feature the stories behind the buildings and people that were involved in making 2MT Writtle the first radio entertainment station to regularly broadcast 100 years ago.

The 90 minute walk will start at the Rose and Crown on both the Saturday and the Sunday afternoons at 1 pm and 3pm.

Booking is essential as numbers will be limited.

The price is £5 per person (Children under 12 half price) and includes a donation to a local charity.

All Saints Church  The Marconi / Platt window can be seen throughout the weekend with photos of its dedication in 1992 and a video about its history.

Writtle Green will be restricted to traffic on Saturday but additional car parking will be available on the Eastern Campus of Writtle College University off Lordship Road, next door to Wilkins Lordship Tea Rooms.

Marconi Celebrations 2022 - A day of celebrations 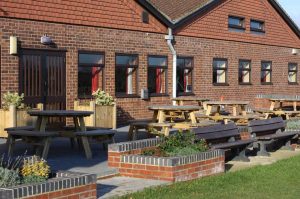